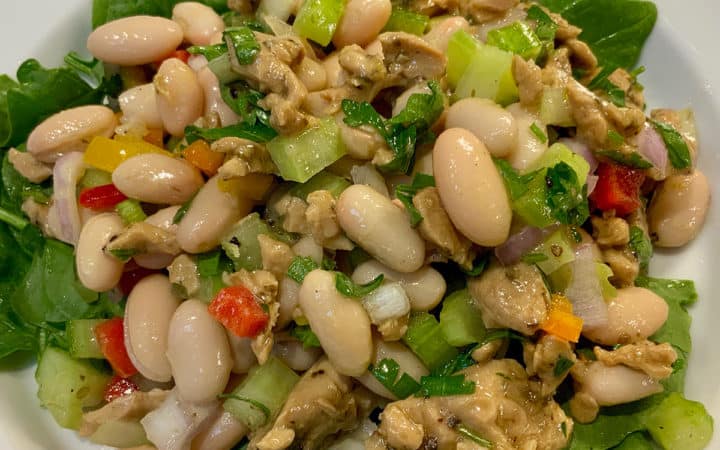 I recently learned about Good Catch, a cool company that makes plant-based seafood products.  Good Catch uses a blend of six plant proteins made from legumes – peas, lentils, chickpeas, soy, fava beans, and navy beans – and have created a credible stand-in for tuna.  Good Catch’s Fish-Free Tuna has racked up several impressive awards from NEXTY and Veg News, most recently winning the 2020 Best Plant-Based Seafood category from World Plant-Based Awards. I figured it was high time that I gave Good Catch Fish-Free Tuna a try. 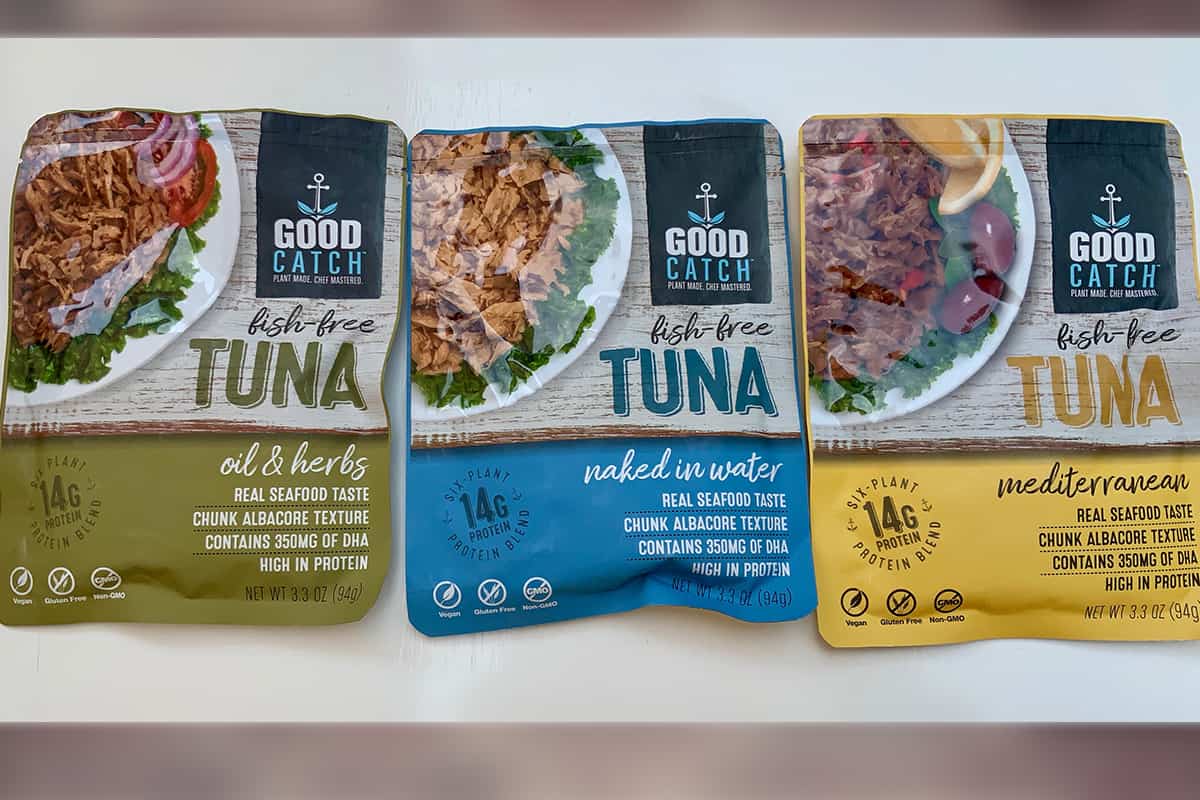 Each variety has 14 grams of protein, zero cholesterol, and 100 calories per serving. I chose Oil & Herbs as closest to what I would use if I was making this salad with “real” tuna. However, the Mediterranean variety would also be well suited to this recipe.

The recipe is simple and quick to prepare. Just gather your ingredients . . . 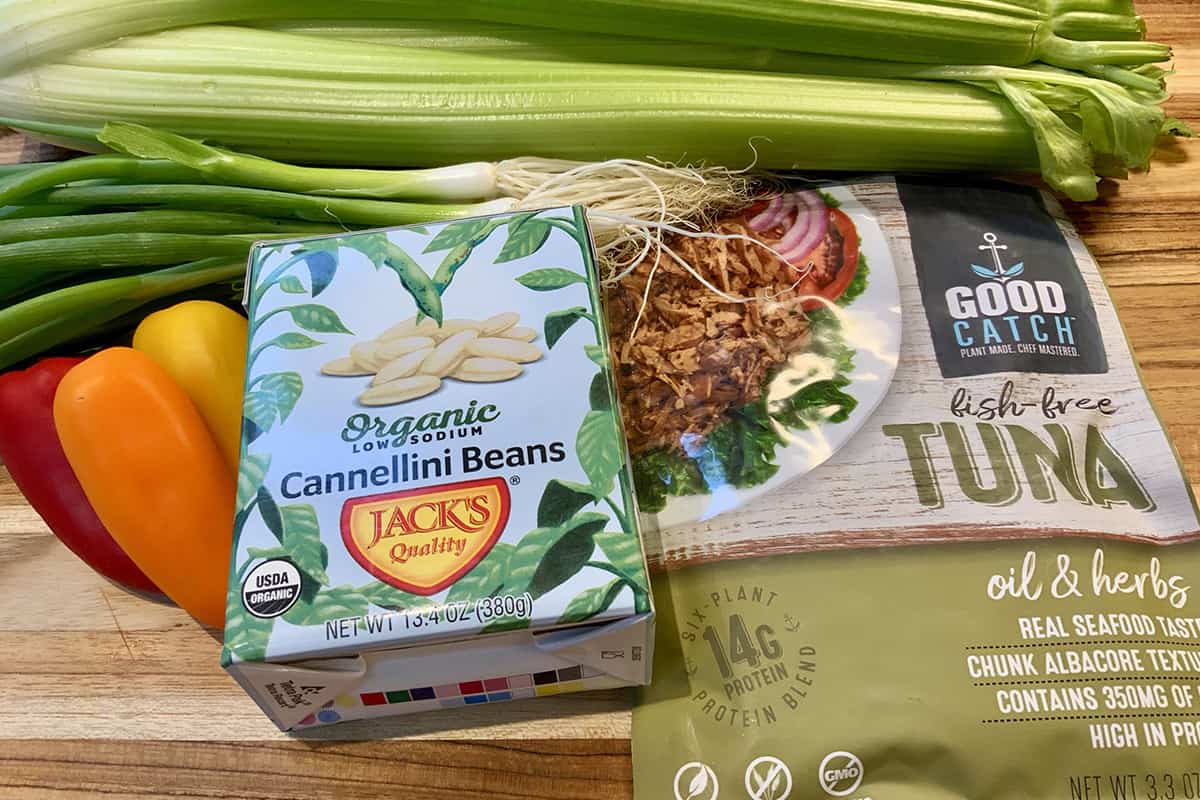 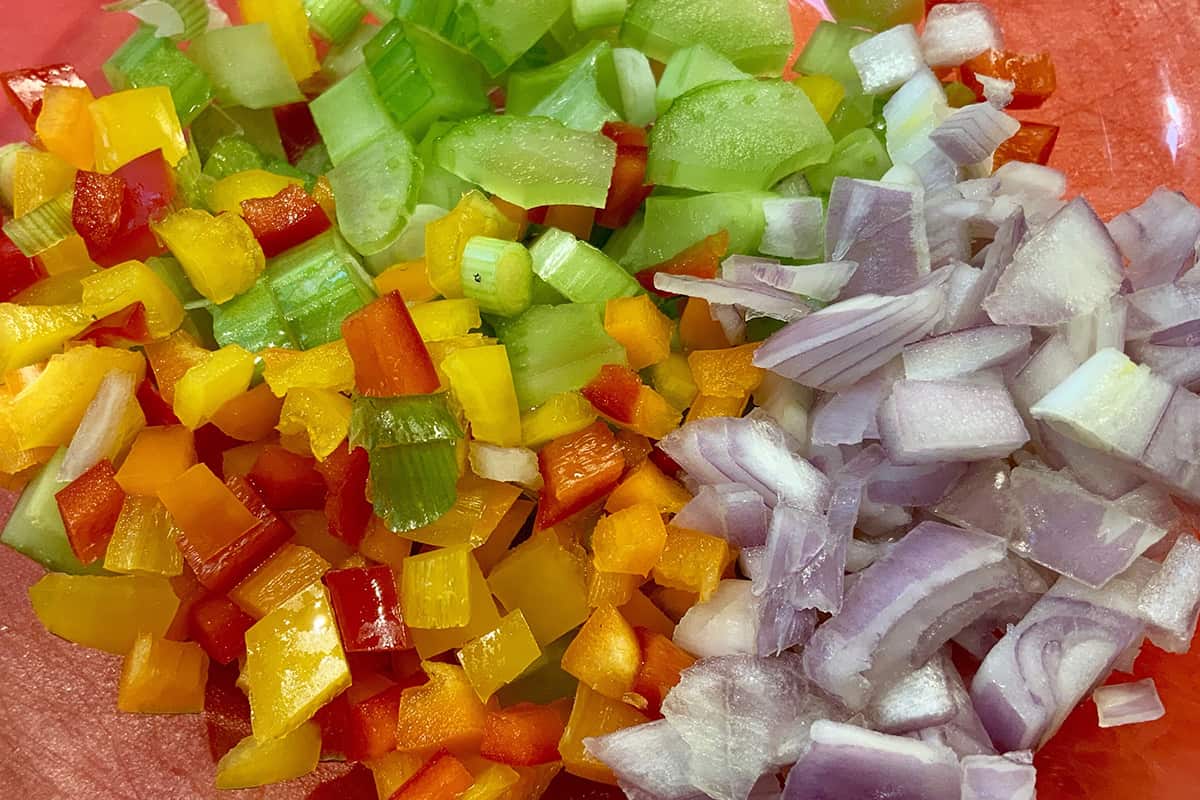 Drain and rinse your cannellini beans, and mix in all of the remaining ingredients.

The first thing I noticed is that the Fish-Free Oil & Herb Tuna is a little darker in color than “real” tuna, but it flaked well and had a very similar texture to real tuna. 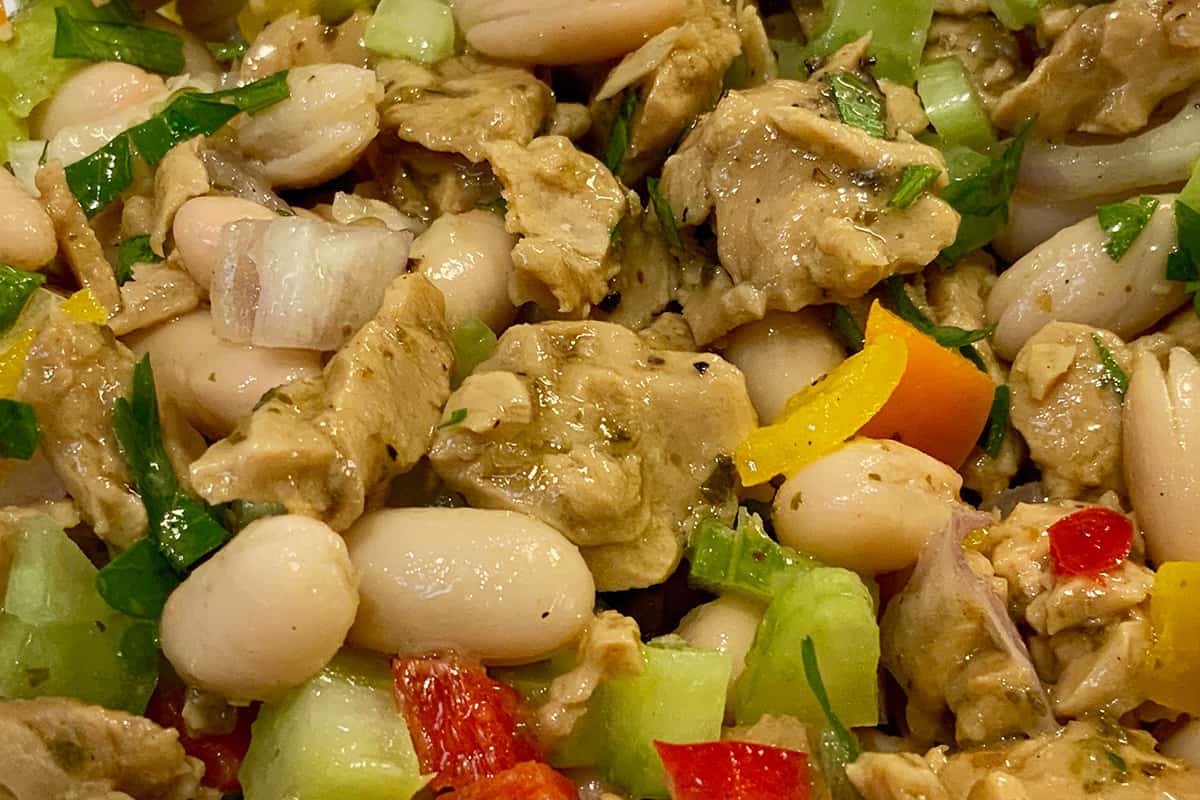 So that you can see and compare the difference in appearance for yourself, here’s a shot of the same recipe made with SafeCatch Wild Albacore Tuna. 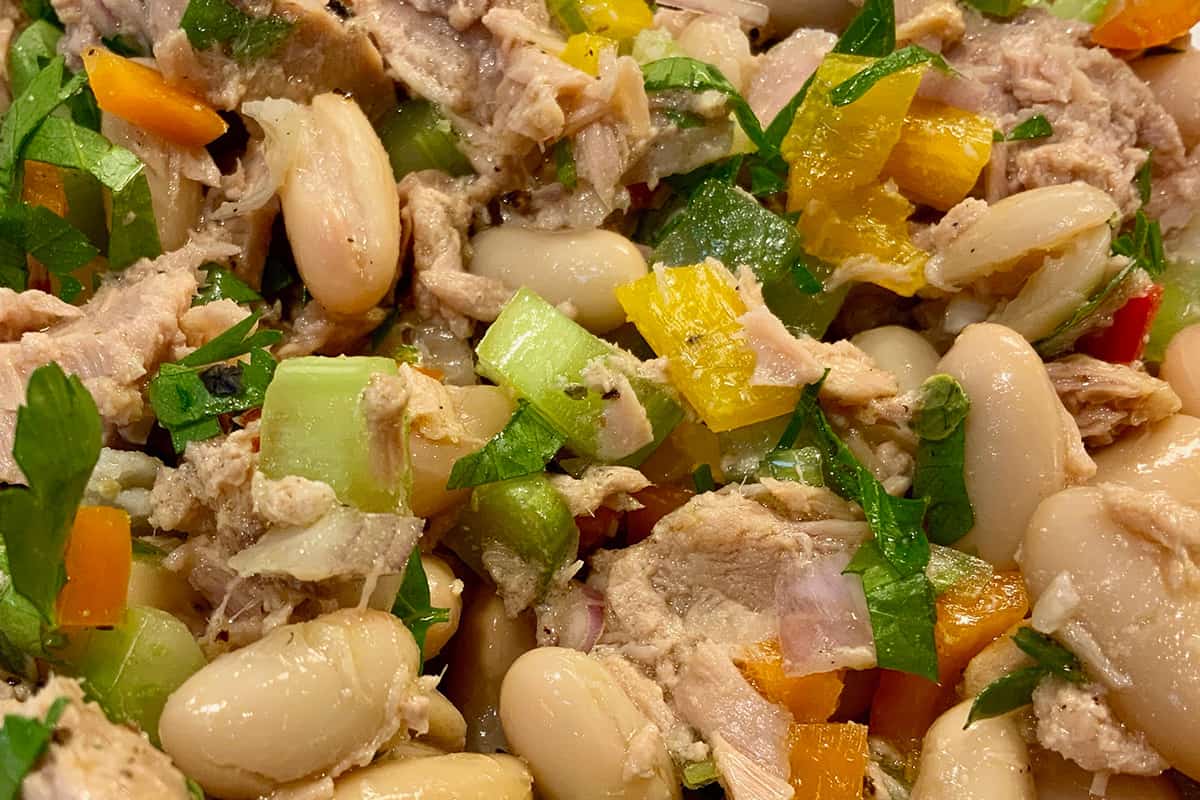 Since both salads look pretty darn similar to me, the question was whether I could fool my carnivore hubby was into believing that the Good Catch Fish-Free Tuna was “real” tuna.

Unfortunately, the answer was no . . . but not because of the taste! It was primarily because the Good Catch Fish-Free Tuna lacks that oh-so-distinctive fishy smell of real tuna.

The bottom line was that Good Catch produces a credible stand-in for tuna in terms of both taste and appearance . . . but without that fishy tuna smell.

Even if you’re not a vegetarian or vegan, I hope that you will consider trying Good Catch’s Fish-Free Tuna.  As a scuba diver, I’m concerned about overfishing, which is severely impacting many species of tuna.  There is also the problem of bycatch, which can represent 28% of the total catch according to World Wildlife Fund.  Because the commercial tuna industry still uses longline baited hooks and gillnets, bycatch can include swordfish, mahi mahi, dolphins, seabirds, and marine turtles which are unintentionally caught and throw away.  And last, but not least, there is the problem of mercury. Since predators like tuna are near the very top of the ocean’s food chain, the mercury that tuna ingest by eating smaller fish adds up and bioaccumulates in their bodies.

How does mercury get into the ocean in the first place?  Generating electricity through burning coal and incinerating waste are two of the reasons why airborne mercury has contaminated our oceans, lakes, and rivers.

As we approach Earth Day this week, let’s think about simple ways that we can break the cycle of overfishing, bycatch, and mercury contamination associated with commercial tuna fishing.

Perhaps one easy way is to reach for a pouch of Good Catch Fish-Free Tuna! 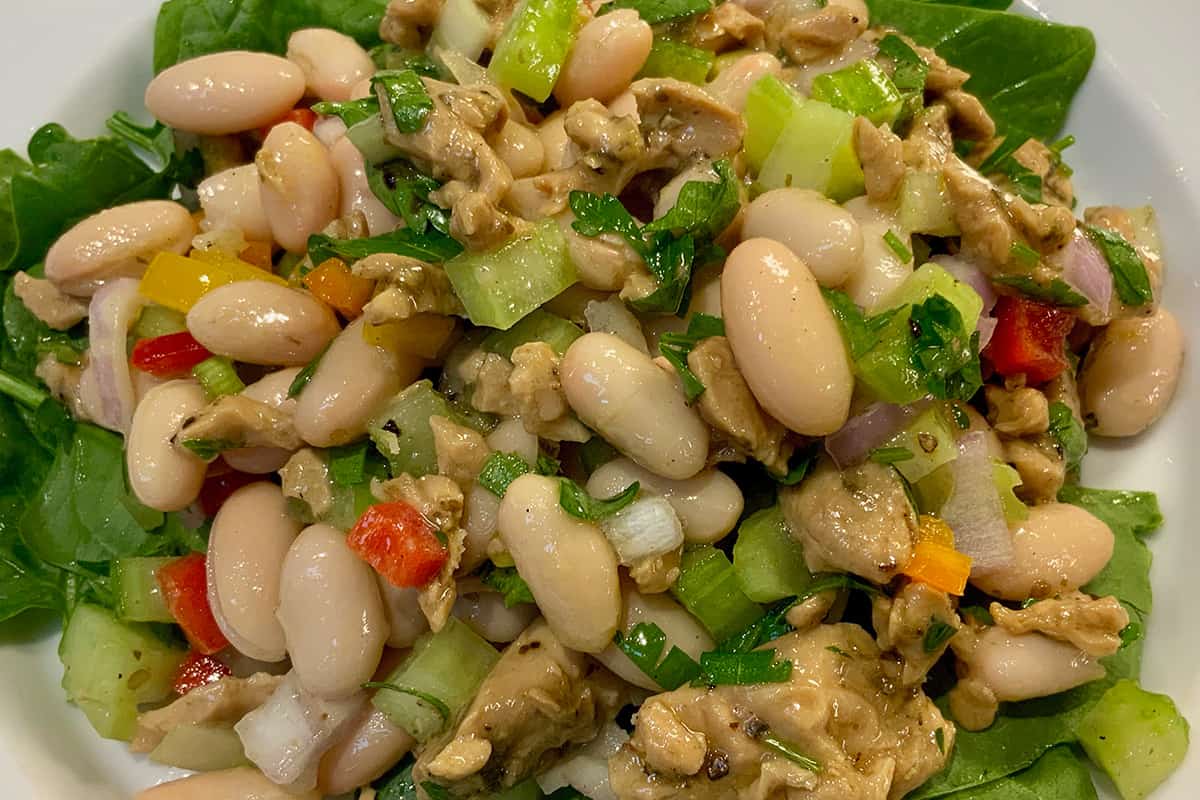 Love classic meat dishes? So do I, but I'm a vegetarian. Have been since the 70's. Explore with me as I create meatless versions of classic recipes like Beef Stroganoff, Mexican Black Bean Chili, Swedish Meatballs, Gumbo, Lasagna, Chicken Piccata, and much, much more. 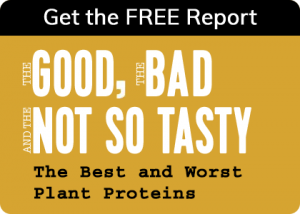 We take classic meat dishes and make them meatless! You’d be surprised how easy it is. And how delicious they are. Join me on this journey.